Every parent or caregiver with a child looks forward to their child’s first words. Aside from being a magical moment, speech is a specific milestone for children, which starts to develop from the time they start to babble.

Lack of babbling or not reaching a speech and language milestone may either mean that a child needs a little bit more time to catch up, or it can mean that your child has speech issues that may be resulting from autism.

Although lack of speech doesn’t necessarily mean a diagnosis of autism, speech and social issues are hallmark signs of the disorder. Once the child is diagnosed and parents and caregivers realize that their child is nonverbal or has a speech delay, the first question that pops up in their mind is “Will my nonverbal child autistic child ever speak?”

Are All Autistics Nonverbal?

There is no simple or straightforward answer to this question. There are nonverbal autistic people and there may be different reasons behind an autistic person being nonverbal. This doesn’t necessarily mean that they will never speak or will speak at a specific time when specific methods are followed.

Individuals with autism may have delays or difficulties with speech and communication and the severity thereof changes from one autistic person to another. Each autistic person has different communication skills. While some can speak well, others may not speak at all. It is estimated that around 40% of children on the autism spectrum are nonverbal .

This could be the result of a couple of things. The child may have apraxia of speech, where the person’s ability to say what they actually want correctly can be interfered with. It could also be because the child has not yet developed verbal language skills to speak. Sometimes, some children with autism may also lose verbal skills they have acquired if the symptoms of the disorder become more prominent and worsen in time.

As mentioned before, a great portion of autistic people don’t speak. However, nonverbal autism is not an official status , and there is no separate diagnosis for nonverbal autism. This is due to the fact that there is actually no clear and set line between nonverbal and verbal autistic individuals.

There is no distinctive separation because some nonverbal autistic individuals may develop the ability to use a few words in a meaningful way but not be able to participate in natural daily conversations. Others may speak a little, but may not be able to use language in a meaningful manner. They may repeat or echo what they heard from others around them or even from TV. Instead of using what they have learned and echo to communicate their wants or needs, they utilize them as some form of self-calming stimulation, like stimming.

Not being able to use spoken language effectively does not mean that the individual will not be able to communicate in other ways. They can communicate through written language, sign language, or assistive digital communication devices, like Otsimo AAC.

Until very recently, people believed that nonverbal children with autism were intelelctually disabled. This was due to the fact that the IQ scores of nonverbal autistic children fell under 70. However, it has become clear that the traditional and typical IQ tests are not the best tools when it comes to measuring intellectual ability in autistic children.

There are many reasons as to why it may not be a good idea to test intellectual abilities of children with autism with typical IQ tests, especially when the child is nonverbal. Since IQ tests mainly depend on the test taker’s ability to quickly understand and respond to verbal information, nonverbal autistic individuals may not be able to perform very well due to obvious challenges they face with regards to the disorder.

Individuals with typical development do not often get trained to work with special needs individuals, especially nonverbal autistic children. They don’t know how to engage the child or they may not know how to read to them. This will cause the child to not reach and present their highest intellectual potential.

In short, it is difficult to figure out the nonverbal autistic child’s intellectual abilities through standardized tests, since these children are not able to fully cooperate with the intents of the test. However, this does not mean that being a nonverbal autistic is equal to having a low IQ. Depending on where the child is on the spectrum, they can handle complex math problems or puzzles and be able to handle intellectual challenges.

This brings us to the fact that “nonverbal” being assumed equal to “intellectual disability” very often. However, workshops and studies on this topic proved that this assumption is based on lack of valid assessment methods that are developed specifically to fit the needs of the nonverbal autistic individuals.

Will My Nonverbal Child Ever Talk?

It is possible for many autistic children with delayed speech to gain the ability to communicate through spoken language. However, some may never be able to acquire more than a couple words. This depends on the severity of the symptoms of the disorder, as well as the intervention and education provided to the individual.

When talking about whether an autistic child will ever talk, it is important to remember that, according to the NIH , the tools we currently have to measure have low reliability and validity for this population of individuals.

As mentioned before, around 40% of children with autism don’t speak. However, a recent study was conducted by the Center for Autism and Related Disorders and published in Pediatrics with participants who had language delays such as nonverbals and those who could speak only simple words at the age of four. This study showed that 70% of the children with nonverbal autism that participated in the study were able to speak in simple sentences later on. In addition 47% of the participants became fluent speakers.

Another finding from the study showed that most participants had higher IQs than previously thought when an attempt was made to see if nonverbal autistic children would develop speech. Moreover, it was found that stereotyped and repetitive behaviors and interests did not really affect language development.

Although we can’t with certainty say that nonverbal autistic children will talk, this study gives hope and provides insight into the nonverbal autistic children’s speech development. For some, it takes a little bit more time to get where they want. Speech therapy and similar interventions are great help. Any development in language is a positive gain both for the autistic individual and those around them. 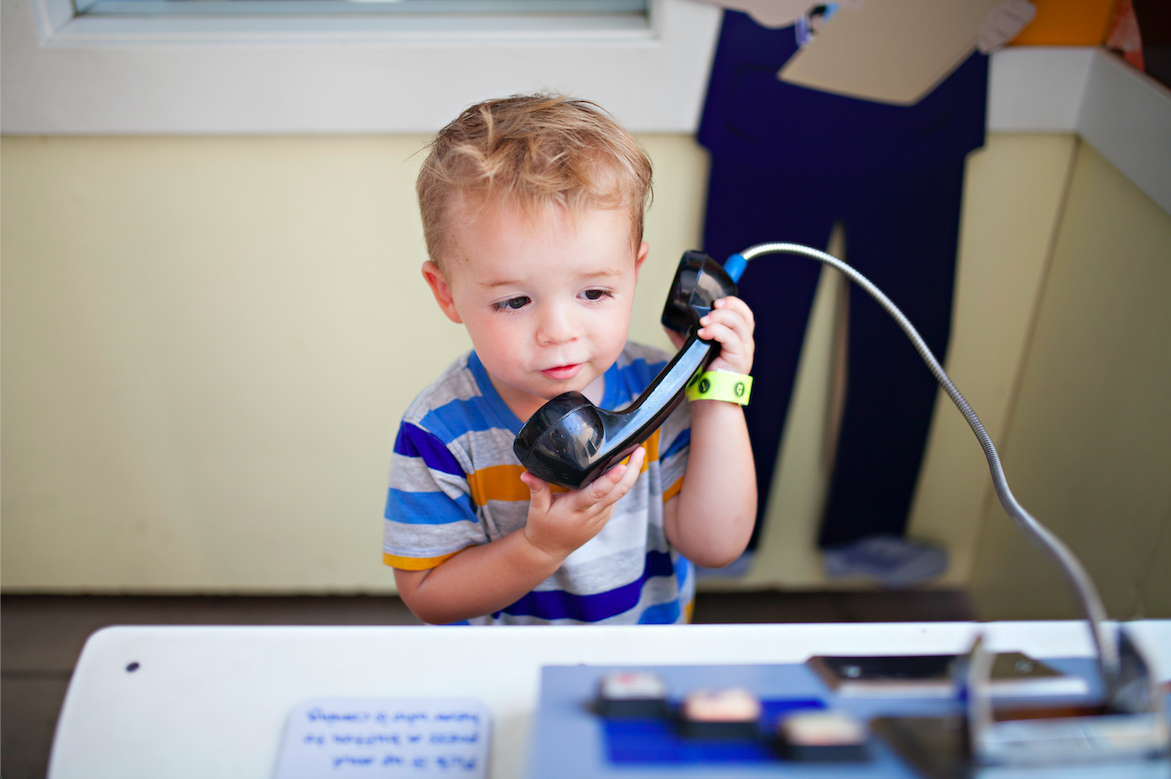 If an autistic child is nonverbal, this definitely doesn’t mean that they are noncommunicative. Yes, speaking is one of the ways how people communicate with those around us. Language use lets us interact with other people and communicate our wants and needs, starting from our first couple of months of life. However, lack of speech doesn’t necessarily mean that the child doesn’t want or need to communicate.

Not speaking conventionally doesn’t make people not want to share their wants and needs. Speaking or even not speaking is not a factor that determines the level of functions for the individual. Every person with autism has the capacity to have emotions and thoughts. The point is to provide them with the voice that fits them to convey these ideas.

In addition to speech, there are plenty of other ways to communicate. Moreover, communication and provision of such is a right for all children. If a child is not verbal, there are tools and techniques to implement either to encourage speech or to assist it.

There are different types of techniques and therapies that you can use to encourage your nonverbal autistic child to communicate. Here, it is important to remember that you need to evaluate each approach and its effects on your child, whether or not it works. Because not all therapies or techniques will work for every child. Be of high spirit and experiment to find the best suitable solution that works for your child.

Picture Exchange Communication System (PECS) is a type of alternative and augmentative communication system developed in 1985. It is used to help people who do not have or have little communication abilities to communicate through using pictures. These people are taught to give another person a picture to get what they want. This system works very well both at home or in the classroom. It can be used by people with various cognitive and communication issues.

Sign language is used by both speaking- and hearing-impaired people. It is an effective and rich way of communication. Nonverbal children with autism can also learn and use sign language to communicate. One of the advantages of sign language is that the person can always utilize it to communicate as there is no equipment to carry around. However, it may be a little difficult for those with severe fine motor difficulties.

Augmentative and Assistive Communication (AAC) devices are among the most effective ways of communication for nonverbal children with autism. This device can be a tablet or a smartphone that can be carried around to use as needed. This device will have word cards on them, so when touched on or pushed, the person using it will create messages to be conveyed. In the market, there are devices specifically designed solely to be an AAC device but there are also more affordable options, such as AAC apps that can be downloaded to the device you already have at hand.

When choosing an AAC system or app for your nonverbal child, there are many things to consider. Not all systems will be effective for your child. You can test the system before making an investment.

A Success Story: A Child That Could Talk

Eric is three years old and he is nonverbal. He was able to understand and produce a few repetitive words and phrases. These words and phrases, he picked up from the TV show he loves watching. Through his speech therapy sessions, Eric managed to make connections between the words he produced and the consequences of this action. However, Eric never really moved further in terms of acquiring smooth and uninterrupted speech skills.

His speech therapist suggested that he used an augmentative and alternative communication app on his parent’s tablet. This AAC app turns picture cards into speech. After getting accustomed to the system, Eric is now able to tell his father what he would like to eat for lunch using the tablet. When he wants a story time, he can tap on the appropriate cards. This has made the relationship between Eric and his parents richer and deeper. Eric can now make choices, communicate his wants, needs, and ideas easily.

For this to be a success story, we or Eric __ don’t need him to speak fluently __ through intervention methods. The aim of these methods and tools isn’t to make anything out of thin air. They are in place so that we can give Eric the best possible opportunity to communicate that fits his skill and development level. AAC is exactly doing that.

Here’s an example of Eric’s AAC use. 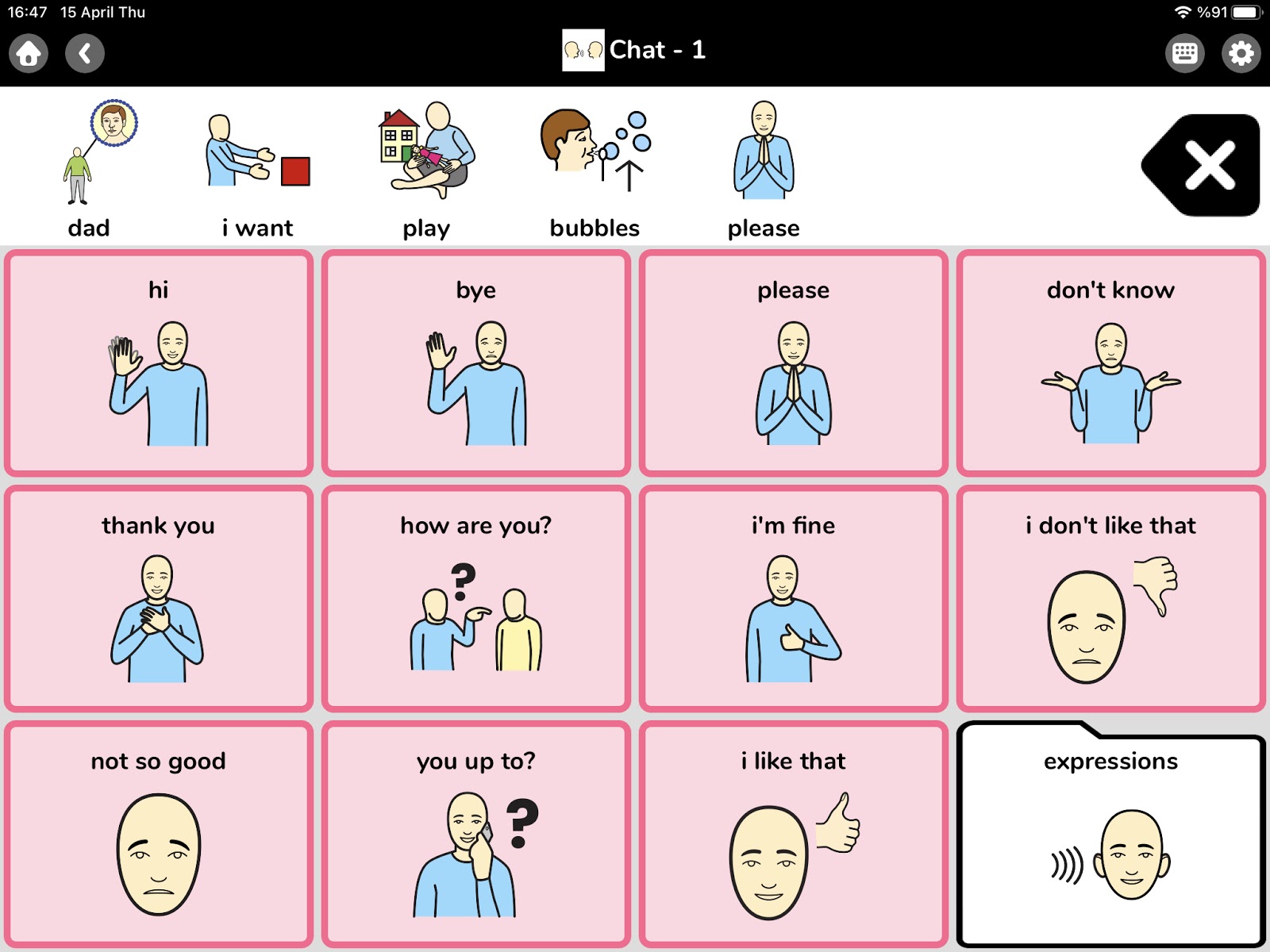