Autism is a neurodevelopmental disorder that develops in the early ages. The major problem of individuals with autism is that different parts of their brains does not work together. Many struggle in communication, self-explanation and motor skills. Autism may also be determined in adolescence and adulthood.

Individuals with autism have learning problems. Depending on disorder severity, they occur in childhood or adolescence. Autism is treatable; however the treatment process is quite long and difficult. Controlling an early diagnosed case with a long treatment and therapy process enables the individual to gain their skills.

How to Treat Autism

In some cases, individuals with autism might need to utilize medication. This disorder might, especially in puberty, trigger disorders like depression and anxiety. To avoid such situations, one should minimize effects of said disorders, thus use medication. However, physical and cognitive therapies make up the basis of autism treatment. These therapies will help individual with autism to gain skills and communication abilities.

The main purpose of these therapies is to help individuals to gain their abilities. If the autism is diagnosed in early months of life and therapy is started immediately, it may help individual to gain motor skills and communication ability. There are seven basic therapy methods used in treatment of individuals with autism.

The main purpose of therapies are to enable individuals to gain abilities such as perceptual, auditory, communication and contemplation.  Experts have different opinions on these methods. With each method, certain progress can be achieved. However, there is no commonly-held opinion on which of these is entirely effective and relatively safer.

Sensory integration is a commonly used method since 1970s. This method assumes and is based upon the fact that individuals with autism have some deficiency in their perceptual, auditory and interpreting abilities. The main objective of the therapy is to increase the behavior and stimuli and develop sensory integration ability. To rephrase, the goal here is to eliminate perceptual, auditory, interpreting and contemplating problems by increasing mental function.

Auditory integration is a method that has been used since the 1960s. Objective of this therapy is to find the sensitivity of an individual with autism towards audio frequencies and to enhance auditory, thinking, interpreting and communication abilities by using the right tones. In the 60s, this method has started to be used in many places around the world after France, thanks to Tomatis and more. Children are given a headphone, with which they listen to some audio frequencies and depending on their reaction, the treatment is applied.

In scientific community, auditory integration is also a controversial method. Although it is used in many clinics, it is still seen as it does not have a scientific basis. Many science people are of the opinion that audio frequencies are not enough by themselves in measuring reactions of children.

Music therapy is a popular therapy method used in recent years. The objective of this method is to have children create an emotional bond. Individuals with autism join music sessions and thus enhance their auditory and cognitive abilities.

Another goal of this therapy is to increase the use of verbal and body language in patients. Thanks to music and dance sessions, they acknowledge that they can develop communication skills and communicate more easily with other people. Thus, they maintain the communication with therapists or their friends. Also, in some therapies, individuals are required to play an instrument. These activities are considered to increase auditory abilities.

It is scientifically proven that music therapy is an effective method on increasing the auditory ability. However, there is not a certain judgment that this method will give the same results on all cases. However effective a method this can be on enhancing certain skills, many experts think that music therapy should be applied with other methods.

Main objective of art therapy is to provide the individual with an emotional relief along with to help develop visual and auditory ability. Visual arts, such as ceramic, are used in this therapy. Individual with autism is asked to produce in these fields of art.

Art therapy is effective onself-expression ability of the individual.  However it is known that by itself, it is not a treatment method. Many experts believe that even though art therapy brings about a temporary relief, it is not a sufficient method to enhance visual ability.

It is generally accepted that communication skills of individual with autism who plays any role would be enhanced and their interpreting and contemplating skills would be more efficient. Drama therapy is based on this concept. Patients are guided to performing arts under control of a special instructor and a therapist. They are asked to take up roles, use items as tools and replace them with other items. This activity is quite effective on increasing intellectual ability of individuals with autism.

Individuals with autism have difficulty in understanding figurative expression. Drama therapy helps them understand concepts like metaphors and contemplate. It is also a good method for them to treat themselves. However no scientific settlement was reached on this therapy method. Although it is applied in many places around the world, it is not proven in a scientific environment that this method generally affects recovery process of individuals with autism.

Dolphin therapy is among the most reacted therapy methods. In this therapy, children with autism are asked to get into a pool with dolphins. This is believed to be a good rehabilitation method that is accepted to positively affect communication abilities and social developments of the children. It is widely used in Turkey, Mexico, Israel, USA, Russia and m 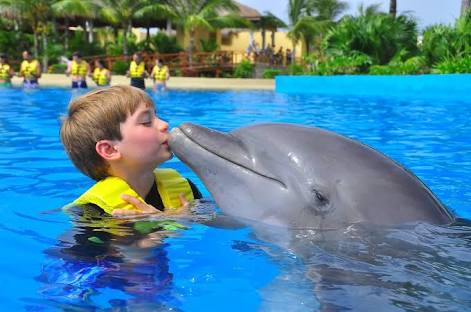 any other countries. Dolphin therapy gets reaction from animal rights defenders and environmental organizations. They often protest in order to close dolphin parks and therapy centers. Also, it is a fact that dolphins might show aggressive behavior at times and this might affect children in a bad way. Scientifically this method is among the least productive and most controversial ones.

Also known as hippotherapy, this method of riding horses is used in many countries, particularly in Germany. Main purpose of this method is not only for children to gain horse riding skills, but also for them to benefit from the emotional activity arising from riding. This method is also said to provide children with kinetic abilities and a serious relief.

It is known that horse riding provides relief for children with autism. However, there are serious opinions regarding that his method provides temporary relief and generally does not contribute to the treatment. With that being said, horses can show aggressive behavior and this might affect children negatively. Thus, many experts does not believe that this is a scientific method.