What You Need to Know About Down Syndrome

Down Syndrome is a condition where the person has an extra chromosome. A chromosome is a DNA molecule that contains the genetic material of an organism. They are like small packages of genes. During pregnancy, chromosomes determine how a baby’s body forms, and as it grows in the womb, and even after birth, they determine the baby’s body functions.

Which Chromosome Causes Down Syndrome?

What this extra copy of the chromosome does is that it changes how the baby’s body and brain develop. This impact can cause mental and physical challenges for the baby born with the condition.

Although people with Down syndrome might behave and look similar, the condition varies in terms of its severity in individuals. The condition can cause lifelong intellectual disability as well as developmental delays. Down syndrome is one of the most common genetic chromosomal disorders. It causes learning disabilities and other medical abnormalities such as heart and gastrointestinal disorders.

Depending on how many cells have a copy of chromosome 21, there are three types of Down syndrome :

Why Do People with Down Syndrome Look the Same?

People with Down syndrome may share some common physical features. Here are some:

We learned that chromosomes are basically packs of genes. These genes direct the production of a wide range of materials to the body and the body’s needs. This direction done by the gene is called the gene’s ”expression.”

In Trisomy 21, there is an extra set of genes, which leads to overexpression of the involved genes. This causes certain products to be produced at an increased rate. For most genes, their overexpression doesn’t have much effect since the body has regulating mechanisms of genes and their products. However, the genes that cause Down syndrome seem to be not in this group.

Ever since the 21st chromosome was discovered, researchers have been asking themselves which genes are involved in this process. Years of research yielded one popular theory. This theory states that only a small section of the 21st chromosome needs to be triplicated to get the effects seen in Down syndrome. This portion was called the Down Syndrome Critical Region

However, this region most likely consists of several areas that may not be side by side rather than one small isolated spot. Chromosome 21 may hold up to 150 genes but only a small percentage thereof may be involved in developing the Down syndrome characteristics. The question is which genes do what. And it is a highly speculative question.

Scientists have their suspicions as to genes that may have input into Down syndrome, and here are some: 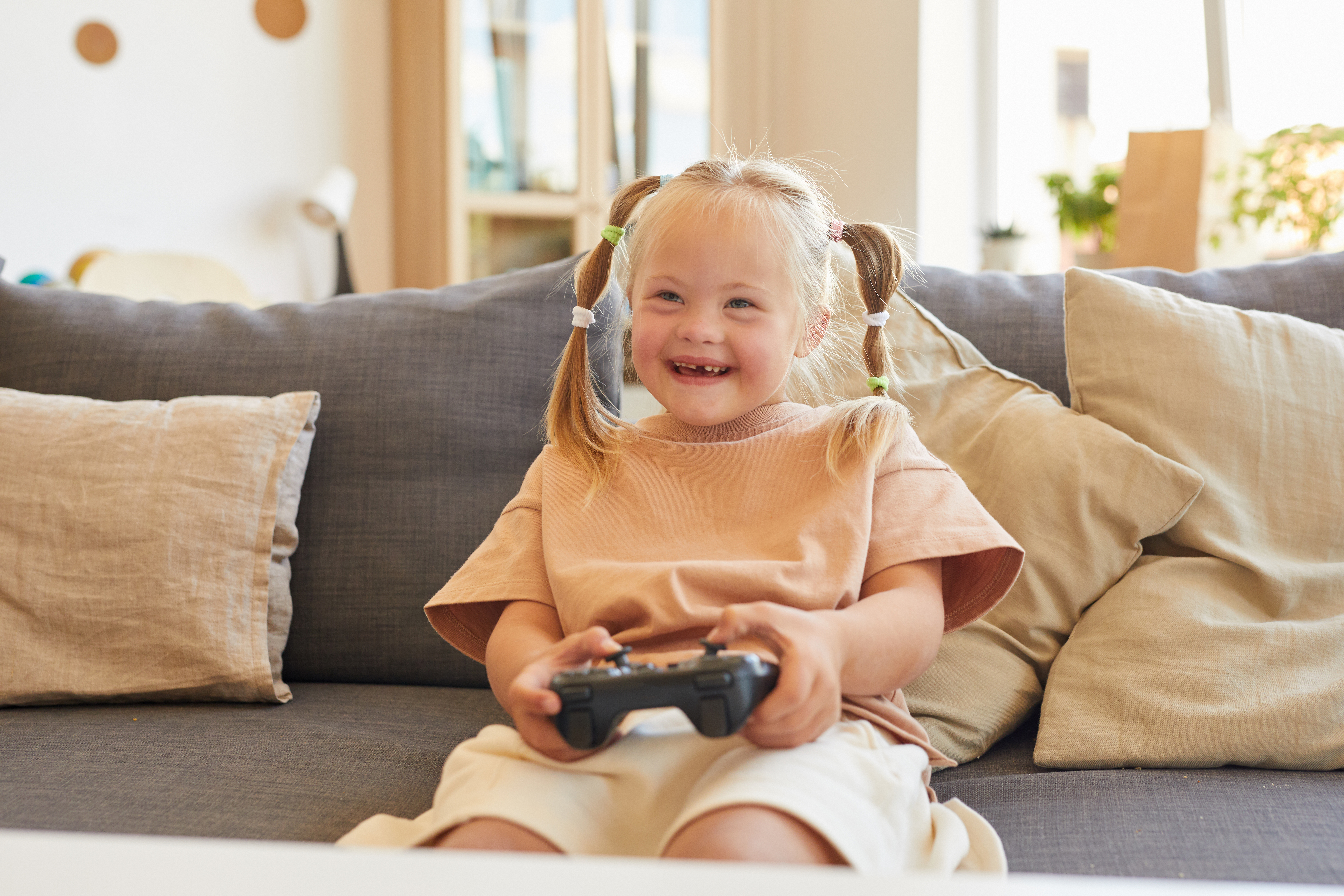 It is important to note that more research is needed to fully link the genes to any feature associated with Down syndrome.

So although low muscle tone, slower maturation and different levels of stimulation to the auditory cortex cause people with Down syndrome to have a certain ”look”, they are not actually the same. They have unique features that they take from their families just like those without the syndrome but share certain facial or physical features that are caused by the genes.

How Common is Down Syndrome?

Down syndrome is and continues to be the most common chromosomal disorder in the United States. Every year around 6,000 babies born in the US have Down syndrome. This makes the rate of the condition about 1 in every 700 babies.

How is Down Syndrome Inherited?

Researchers have pinpointed the chromosomal abnormalities that cause Down syndrome. However, we still have much to learn about why the condition happens and the causes of Down syndrome.

Down syndrome, for the most part, is not inherited. It is determined to be caused by a mistake in cell division while the fetus at its early developmental stages. That being said, Translocation Down Syndrome can be passed from parent to child. Only around 3% to 4% of the children with Down syndrome have translocation and only some of these individuals were determined to inherit it from one of their parents.

Despite Down syndrome being a genetic condition, the likelihood of you having any family history of it is slim. The clinical director of the Down Syndrome Program at Boston Children’s Hospital Emily Jean Davidson, M.D. states that in most cases, the extra chromosome looks like it happens by chance. However, there are some factors that contribute to increasing the chances of having a baby with Down syndrome.

Risk factors for Down syndrome

A study done at Columbia University Medical Center at New York-Presbyterian Hospital in 2003 revealed that the rate of Down syndrome increased with advancing paternal age for the maternal age group of 35 to 30 years. The study also showed that the rate of Down Syndrome for both maternal and paternal age greater than 40 years is around 60 in 10,000 births. This is six times higher compared to the maternal and paternal ages less than 35 years of age. The findings of the study about the paternal age influence on Down syndrome indicate that sperm is a contributing factor to trisomy and increased paternal age can lead to an increase in the frequency of chromosome abnormalities in sperm.

History of having a child with Down syndrome

National Down Syndrome Society states that translocation Down syndrome can be passed from parent to child in one-third of cases. Both men and women can pass the genetic translocation to their children. On Average, What Percentage of Infants Born to 45-year-old Mothers Have Down Syndrome?

A study was conducted in 2005 to determine the risk of giving birth to a baby with Down syndrome for women who are 45 years of age and over. The average risk was found to be 34 per 1,000 births, making it a 95% chance. The results showed that the risk of a Down syndrome live birth for 45-year-old women and over is considerably lower than that has often been assumed. The explanation for this can be that women of this age are often more likely to miscarry Down syndrome pregnancies compared to younger mothers.

How is Down Syndrome Diagnosed?

During pregnancy, there are two basic types of tests available to detect Down syndrome; screening tests and diagnostic tests.

Screening tests for Down syndrome are a routine part of prenatal care in the United States. The screening test can help the pregnant woman and her healthcare provider know the risk level of having a child with Down syndrome. Although they do not provide a definitive diagnosis, they are safer for both the mother and the baby.

Diagnostics tests are typically able to detect whether the baby will have Down syndrome. However, these tests are riskier for both the mother and the developing baby. Similar to the screening tests, diagnostic tests can’t predict the full impact of Down syndrome on the baby. There is no way of predicting this for certain.

During screening tests, a combination of a blood test and an ultrasound is conducted to measure the number of various substances (MS-AFP, Triple Screen, Quad-screen, etc.) in the mother’s blood and to get a picture of the baby respectively.

The technician checks the fluid behind the baby’s neck during an ultrasound. Generally, extra fluid in this area can indicate that there is a genetic problem.

These screening tests are designed to aid in determining the baby’s risk of Down syndrome. However, sometimes normal test results can be obtained but they may still miss a problem that exists.

Diagnostic tests are generally performed after there is a positive screening test. These help to confirm a Down syndrome diagnosis. Here are some of the types of diagnostic tests:

In general, these tests are done to look for changes in chromosomes that would indicate a Down syndrome diagnosis.

Once the baby is born, the doctor will perform a physical examination and order a blood test called a karyotype , which is a laboratory procedure to examine the person’s set of chromosomes, so as to confirm Down syndrome.

How Long Do People with Down Syndrome Live?

There are many factors contributing to life expectancy. Babies with very low birth weight, which is when infants with Down syndrome are born weighing less than 1,500 grams, are 24 times more likely to die in the first 28 days of life compared to those with normal weight. How to Prevent Down Syndrome

Can Down Syndrome Be Detected On Ultrasound?

As mentioned before, during the first trimester of pregnancy, blood and an ultrasound test can be done. During these screenings, health care providers look for certain markers such as certain proteins in the mother’s blood that would indicate increased likelihood of Down syndrome. During an ultrasound test, the health care provider uses high-frequency sound waves to create images. An ultrasound can detect whether there is fluid at the back of a fetus’s neck. This could sometimes indicate Down syndrome.