Kids with speech impediments or communication difficulties can struggle with producing certain sounds correctly. In fact, around 9% of young kids have some sort of a speech language disorder. So if you are feeling like your kid is alone, they are not. One of the sounds that children have most difficulty with is the /r/ sound.

When a child has difficulty pronouncing the /r/ sound correctly, it is called rhotacism . Kids struggle with the pronunciation of the /r/ sound. Your child’s speech-language pathologist may determine that your kid has difficulty with this sound. However, there are many activities to promote /r/ articulation.

How to Make the /r/ Sound

There is a reason that children struggle with /r/ sound and it is one of the sounds learned the last. One of the reasons that make this sound so challenging is that there are many different ways to pronounce it! The pronunciation depends very much on the letters that are combined with the /r/ sound.

We produce the /r/ sound with our tongues put near the roof of our mouth. To make this sound we also have to use our vocal cords. Through the narrow space in our mouths, the air flows. The tip of our tongue should be behind the ridge behind the teeth but not touch anywhere.

Also, the combinations the /r/ sound makes with other vowels can also be placed in different positions of a word, which makes it more challenging to pronounce. The pronunciation changes yet again depending on the position of the sound, if it is at the beginning, in the middle, or at the end of the word.

The /r/ sound is one of the last sounds that kids master as it is so challenging. One other reason that it is so difficult to master is that it is produced only by manipulating the tongue position. This makes it difficult for kids to visualize how to make the /r/ sound in a certain position.

There are ways to stimulate your kid to make the /r/ sound. You can demonstrate the sound of a typical /r/. Explain to your kid that this /r/ sound is made by the tongue being slightly at the back and in the middle of the mouth, but close to the top of the mouth. In order to show how it works, you can use your hand, keep it in a flat position, your palm facing down. Then, put your right hand beneath your left hand and have the palms face each other. Explain to your kid that the left hand is the top of the mouth and the right hand is the tongue. Curl your fingers on the right hand in a way that they almost touch the left hand’s palm. This is pretty much how the tongue acts when producing the /r/ sound.

The steps to produce the /r/ sound is as follows: 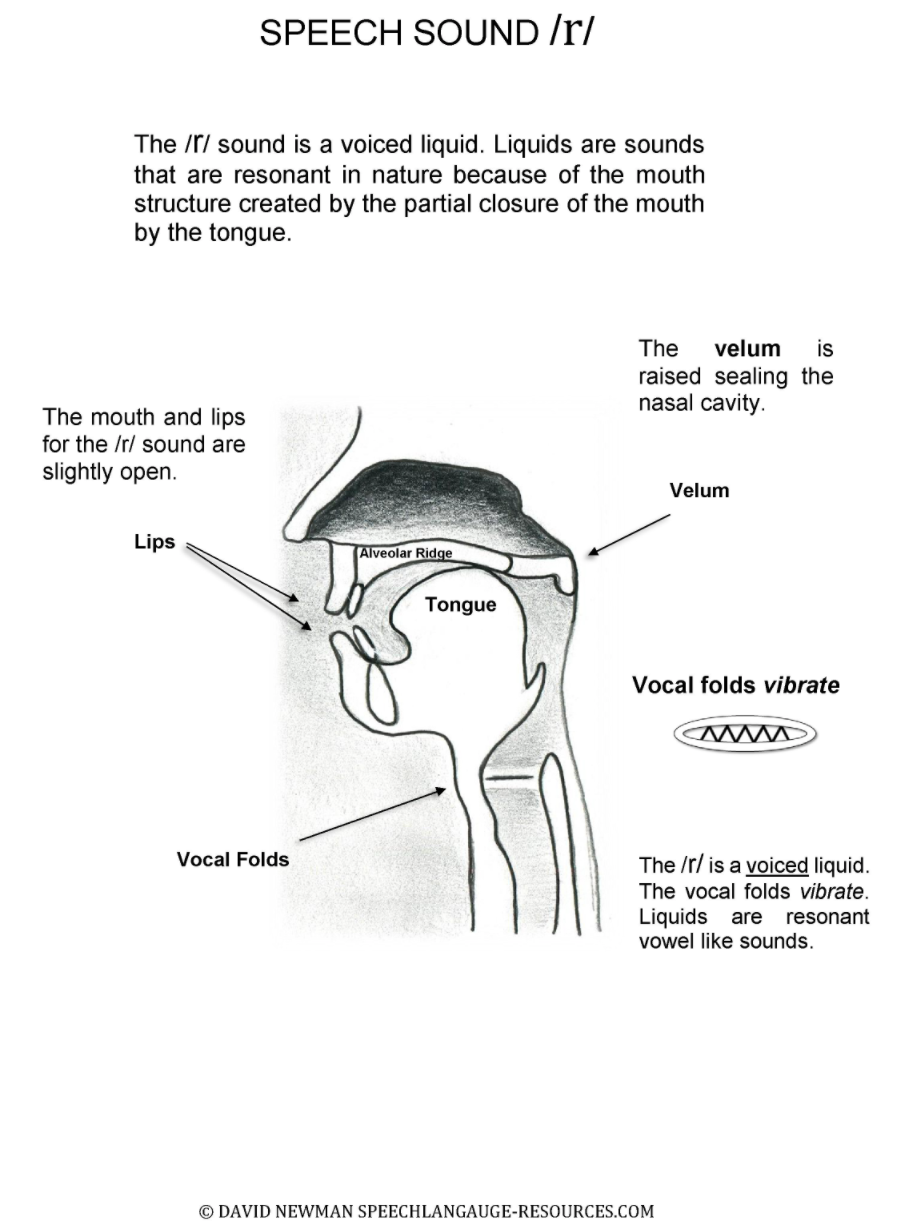 Variation of the /r/ Sound

The challenge of producing the /r/ sound comes from the combinations it makes with vowels in certain positions in a word. If it comes after a vowel, the /r/ sound takes on vocalic properties. This makes it difficult for children to master each and every variation of the /r/ sound.

Considering the initial r, medial r, and final r positions that the /r/ sound can be in a word as well as the combinations that it can make with vowels, there are 21 vocalic and around 32 allophonic types of the /r/ sound. These are er final, ar initial, ar medial, ar final, air initial, air medial, air final, ear initial, ear medial, ear final, ire initial, ire medial, ire final, or initial, or medial, or final, medial/final rl, br, kr, dr, fr, gr, pr, spr, str, shr, tr, and thr.

The big picture is that the /r/ sound seems like it has more variations compared to other sounds in the English language.

What’s the Age to Correctly Say the /r/ Sound?

Sound development happens at different rates for each kid. Although this is not a strict measure to live by, generally, children should correctly produce the /r/ sound by the age of six. However, this development doesn’t occur overnight. Children will acquire the skill to produce this sound correctly over time by hearing and practicing it. If you feel like your kid is falling behind in their sound development, it would be beneficial to consult a speech-language pathologist to have your kid tested and determine if any intervention is needed.

What is the Typical /r/ Sound Speech Development

In order to master the /r/ sound, kids have to go through certain levels of progress. Here is a typical progression:

Of course, this progress doesn’t happen overnight. The kid will have to practice saying /r/ words, where the /r/ sound is located in various places in various words, such as at the beginning, in the middle or final position. Also, since the pronunciation of the /r/ sound heavily depends on the vowel it is used with, the kid will also have to practice prevocalic and vocalic /r/ sounds.

Some children go through these phases quickly, some struggle at some point. The /r/ sound is a really complex sound to master, so a kid may not be able to master all of its variations at once. However, through practice and interventions the sound can be produced correctly.

Tips and Tricks for Encouraging Kids to Practice /r/ Sound

All of the variations of the /r/ sound makes it difficult to figure out the area the kid is struggling. However, this doesn’t mean that the child has to master all of these allophones. Finding out where the kid struggles is the key to providing them with the most suitable practices.

There are some practices that speech-language pathologists and parents and caregivers can try with their kid to produce the /r/ sound appropriately.

This is one of the most beneficial methods that can teach kids how to produce a certain sound. Try modeling producing the sound. However, this could be difficult for the /r/ sound as it is mostly done by the tongue movements rather than lips, so it could be hard to demonstrate for the kid to imitate. Here, the parents and caregivers can have the kid imitate animal sounds. These sounds will be fun to make. Try roaring, or barking like a dog.

This is yet another great method to help the kid to visualize how to produce the sound. Through a mirror, the kid can get a sense of how their mouth or jaw moves, and their awareness of mouth, tongue, and lip movements increase with the use of a mirror.

Auditory bombardment is a commonly used method to teach children sounds. In this method, the child listens to an r word list again and again. Select words that have the /r/ sound in various variations. This intense repetition will allow for the child to hear and imitate the sound they hear repeatedly. The rate of sound development of the child will improve through utilizing this evidence-based method.